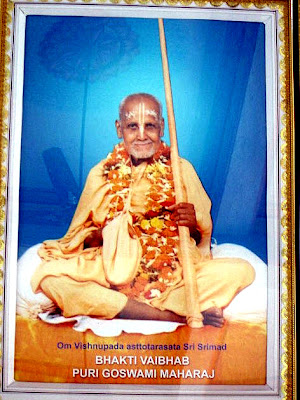 Founder Acarya: Srila Bhakti Vaibhab Puri Goswami Maharaj
The Spiritual master Srimad B. V. Puri Goswami Maharaj appeared on this material plane on 5th day of the waning period of the Moon of Magha in 1913, in the house of his grand-father, in the village Fulta, which is just 5 kms away from Berhampur in Ganjam District of Orissa State in India, Bharata Varsha, the most sacred place in the world. His mother's name is Srimati Devi and his father's name is Sri Damodar. They had four sons and Srila B.V. Puri Maharaj is the second son having no sisters. The parents named our Maharaj on an auspicious day as Nrusimgha. His father came with his family from the village Tulasi near Ichhapur to the village Kutharsingi in Ganjam District. 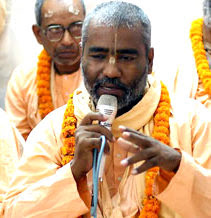 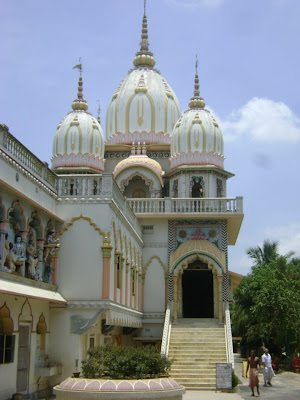 The origins of Sri Krishna Chaitanya Mission are found in 1966 with the establishment of Sri Krishna Chaitanya Ashram in Kakinada, Andhra Pradesh, but presumably the organisation was not registered under its current name until 1983. The organisation has eighteen (18) ashrams in India, as well as a worldwide following. Over twenty (20) Sanyasa initiates, as well as Srila BV Puri Maharaj himself, spearhead the preaching campaign to communicate the tenants of Gaudiya Vaishnava Theology. 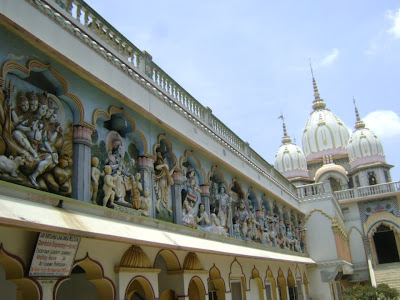 Vaishnava artistic decoration.
The Sri Chaitanya Chandra Ashram in Puri is considered to be the flagship matha; the other mathas are found primarily in Orissa and Andhra Pradesh, as well one in Seva Kunj, Vrindavan and one in Isodyan, Mayapur. Several years ago, European disciples of Maharaj established the Sri Sri Radha Govinda Mandir in Vienna, Austria. 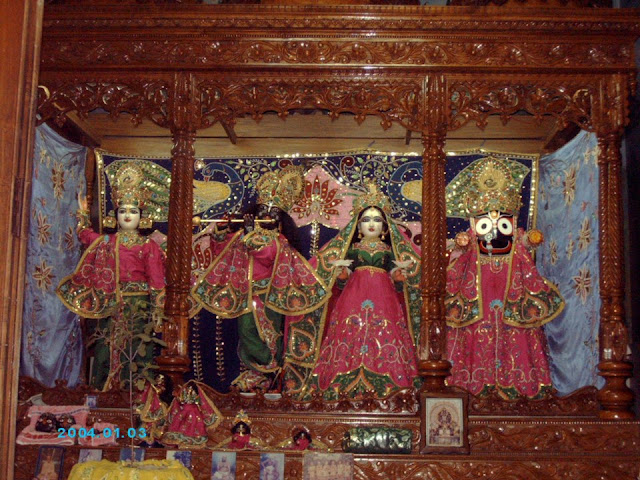 The Sri Krishna Chaitanya Mission also publishes a multitude of books as "Sri Bhakti Bigyana Nityananda Book Trust". The books are printed in Oriya, Telugu, Hindi, and English, but European followers have also reprinted books in Italian and Spanish. 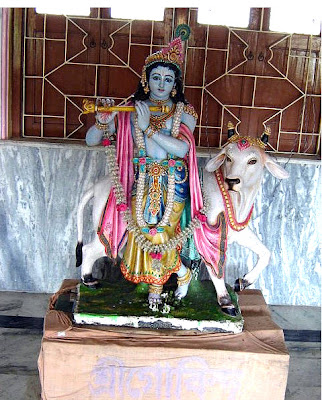 Sri Govinda on the main hall. 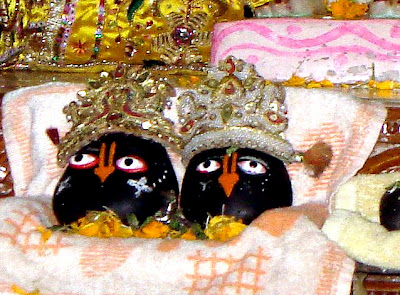 Vaishnavism Real and Apparent
"The word 'Vaishnavism' indicates the normal, eternal and natural condition, functions and devotional characteristics of all individual souls in relation to Vishnu, the Supreme, the All-pervading Soul. But such an unnatural, unpleasant and regrettable sense has been attributed to the word as to naturally make one understand by the word, Vaishnava (literally a pure and selfless worshipper of Vishnu), a human form with twelve peculiar signs (Tilak) and dress on, worshipping many gods under the garb of a particular God and hating another human form who marks himself with different signs, puts on a different dress and worships a different God in a different way as is the case with the words 'Shaiva', 'Shakta', 'Ganapatya', 'Jaina', 'Buddhist', 'Mohammedan', 'Christian' etc." Srila Bhakti Vaibhaba Puri Maharaj. 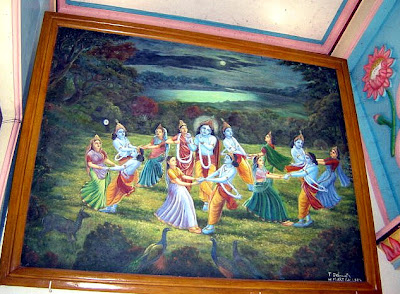 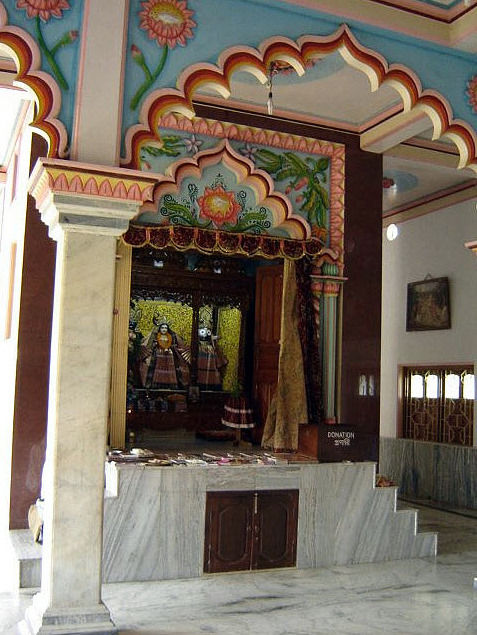 Six Goswamins
''Sanatana, even in his teens, acquired astounding knowledge of Logic, Vedanta, Rhetoric, Philosophy and other Dharma Sastras. We can know this from his writings. His Sikshya Gurus were Vidya Vachaspati, Vasudeva Sarvabhaurna, Sri Paramananda Bhattacharya and Professor Sri Rama Bhadra. Through learning one should have growing attachment to the Lotus Feet of the Supreme Lord Krishna. It is real Para Vidya. When learning creates more love towards sensual pleasures, it is not proper learning. So this is considered to be Apara Vidya. Sri Sanatana dedicated his wisdom and learning in the eternal service of the Supreme Lord Krishna.'' Srila Bhakti Vaibhav Puri Maharaj 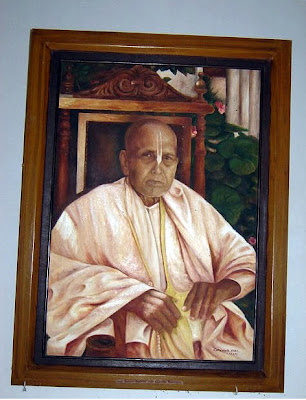 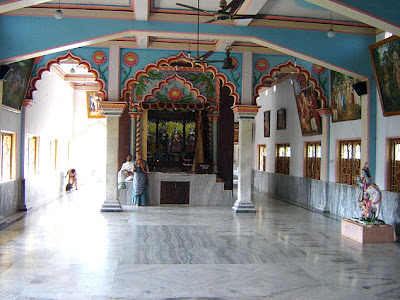 Guru and Atma Nivedan
''The Advent of Sri Krishna Chaitanya Mahaprabhu into this world is a most marked event even to great celestials. Gods like Brahma, Siva, etc. and sages of repute like Sanak, Sanandan, Sanatan, Sanatkumar, etc. greedy of tasting the highest and rarest Transcendental Bliss are born in the material world and having been blessed with the Divine Name, they dance, sing and lose themselves on the wavelets of Divine Bliss. Exalted devotees like Narada, Prahlada, etc. are no exception. Assuming human forms, they too are drinking the ambrosia flowing from the never-ending fountain of the Transcendental Name. Lakshmi and other consorts of Sri Vishnu too, were born in this mortal world in human forms, tempted by the same desire and are having a taste of it. What to speak of all other persons ? Sri Krishna Himself is enjoying the sweetness of His Name ! As such, why wonder at the request of Mayadevi ?'' Srila Bhakti Vaibhav Puri Maharaj. 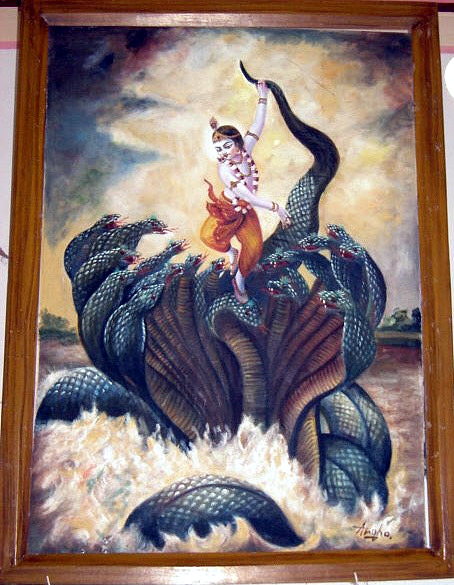 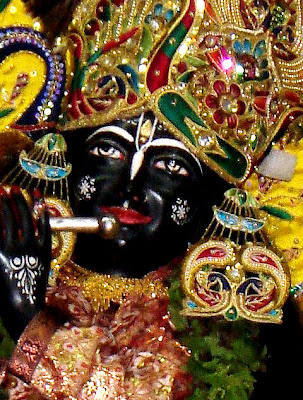 
Sri Krishna
"The Great Absolute should predominate over the crippled forms of infinitesimal absolutes who may appear at the outset as illustrations of non-absolute If the synthetic process of all isolated entities does not go one Undeviated Object of the Absolute, it would prove to be a chaotic emporium of unassimilating difference ; so our mentalities require rectification to arrange their order in a particular line. One of our friendly co-sharers should come forward to explain before us the nature of the course that should be adopted for our methodic comprehension of the irregularities in one line. This unparalleled mercy of the One Friend and His associates is to regulate the disorderly conduct of the body and the mind. The rhetorical principle of the predominating the predominating functions in their bases of activities could give us the result of one of the four ingredients that follow when we are relieved of the worldly deformed conceptions in the pure spontaneity of a defined nature of eternal relationship that exists between the Absolute and the significatory aspects of the internal parts of the Absolute". Srila Bhakti Vaibhav Puri Maharaj. 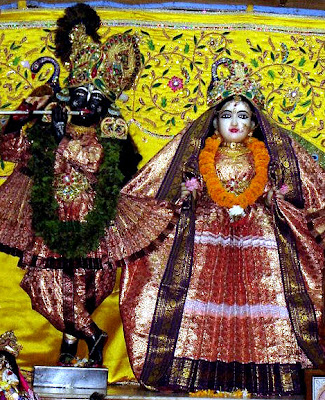 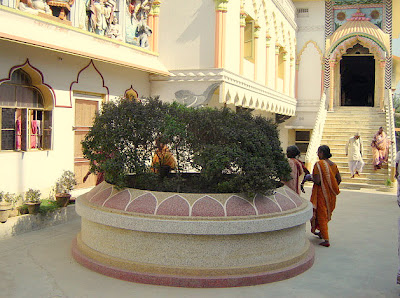 Nam Bhajan
''Prem alone is the purpose of the life of Jivas. Bhava (soul's feeling) develops into Prem. Turning their face towards Krishna, the more Jivas progress, the more do they approach the temple of Prem. Thus in considering the rights of Prem, we meet at the out-set with two sorts of circumstances-one is an intense longing for the unattained Prem, the other is the stage when the pedestal of Prem is already reached. There is no higher stage beyond the latter one- an incessant Rasa, is an undivided unique tatwa of that region. Devotees with utter craving for Prem who are still on the way to it, are again divided into two classes according to their love of seclusion or bustle-the one are called Viviktanandis who are close followers of approved usages, the other are known as Gosthyanandis and are ever happy in preaching. Deep meditation on Godhead is the discipline of Premi-Bhaktas and glorifying or singing the Name of Krishna is their preaching.'' Srila Bhakti Vaibhav Puri Maharaj. 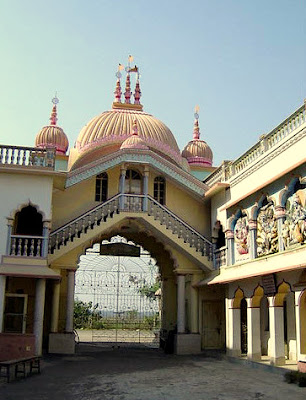 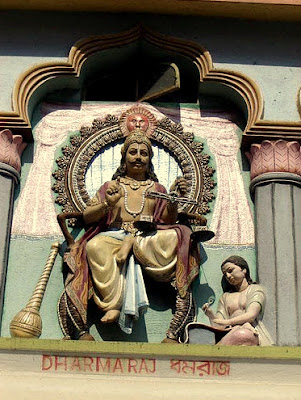 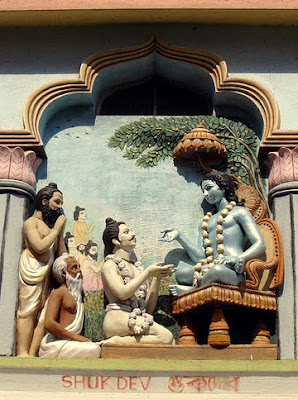 Lord Sri Jagannath
''In Satya-yuga there was a pious king in the solar dynasty named Indradyumna. The king born on an auspicious moment was endowed with all godly qualities such as courage, purity of heart, firm faith in divine knowledge, charity, sacrifice, inoffensiveness, truth, magnanimity, kindness to all beings, steadfastness, vigour and forgiveness. He performed a number of Rajasuya and Aswamedha sacrifices. He was a great devotee of Lord Vishnu. He ruled his kingdom remaining in the capital city, named Avanti''. Srila Bhakti Vaibhav Puri Maharaj. 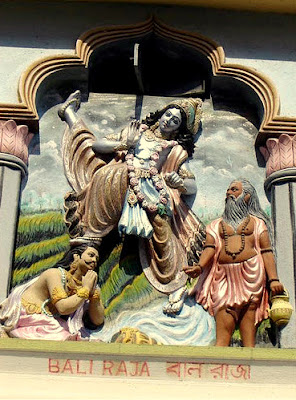 Rai Ramananda
"In this world we can see all around that every body is busily engaged in search of and running amuck to obtain 'Ananda' or bliss. Nobody wants to die, nobody is willing to suffer pain. In the present day religion which is considered by most of the people as a third necessity in life's struggle, is day by day disowned, if not abandoned, on the plea that they have no time to think about religion when every minute of life requires to be devoted for extinguishing the blazing flame of the stomach. Religion, according to them, is a subject which is to be believed and discussed by only certain classes of people who have not much work or do not require to toil for earning bread and butter. But we observe that people who have no difficulties nor worries are equally averse towards religion and God. They say that they have also no time to think about religion. So, it is not true that the opulent are religious, and it is a known fact that neither poverty nor opulence are the causes of becoming true religious or God-believing". Srila Bhakti Vaibhav Puri Maharaj 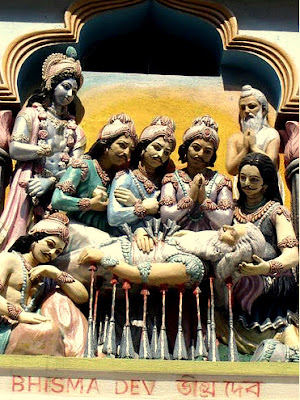 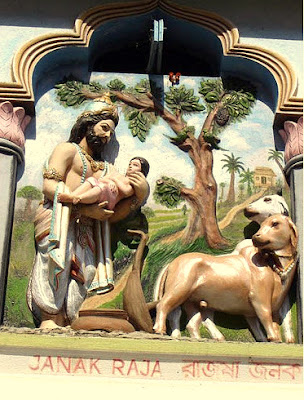 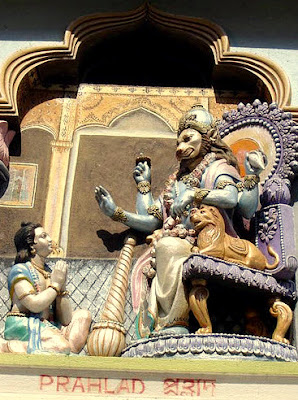 Sri Chaitanya Mahaprabhu
"Sri Krishna Chaitanya or Gauranga Mahaprabhu made His appearance at Sridham Mayapur, on the banks of Bhagirathi river in the district of Nadia, Bengal State, on the evening of Phalguna Purnima is 1407 Sakabda (1486 A.D.), during Lunar eclipse, while according to tradition, the devotees were bathing in the Ganga chanting Sri Harinam, loudly.
Sri Chaitanya was born of Sri Jagannath Misra, a Great Sanskrit Scholar and Srimati Sachidevi and they named Him, Nimai, as he was born under a neem tree. In giving Him that name they were, of course, a bit superstitious too that the bitterness of the tree could keep away the Death God who had previously snatched away eight of their children from their bosom. But the neighbouring ladies called Him Gauranga because of His handsome and gold-like glittering complexion, while His grand father, Nilambar Chakravarthy studying His horoscope, named Him Viswambhara". Srila Bhakti Vaibhav Puri Maharaj. 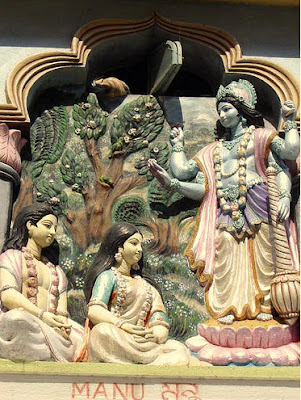 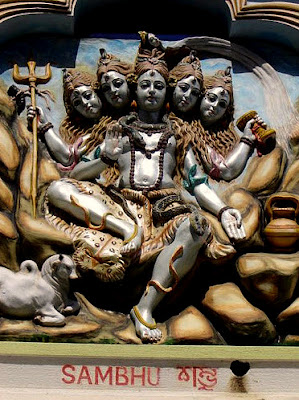 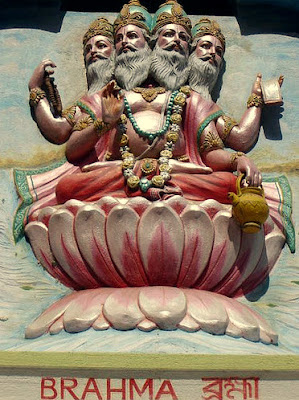 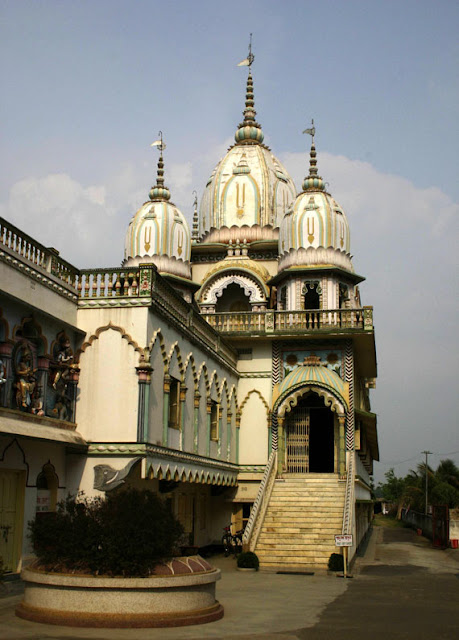 
Accommodation & Prasadam: 35 general room are available by the rent of 100-250 and for prasadam any donation but confirm 1 day before 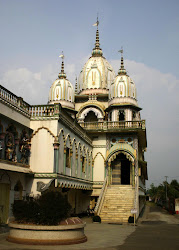 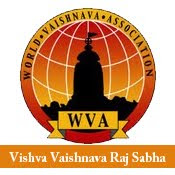